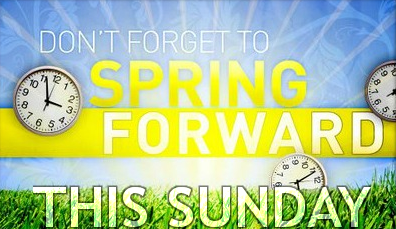 Sunny Days are Ahead – Daylight Savings Time is Here Again 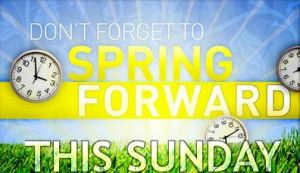 Ah, Daylight Savings Time (DST), further proof that society is a slave to the clock. It’s remarkable to think that nearly 100% of the nation moves their entire lives forward one hour. It’s quite an accomplishment considering that billions of dollars, countless person-hours and tons of research have only reduced the number of smokers in our country by 15%.

But, I digress. There are many theories as to why we have DST. According to timeanddate.com, Germany originally adopted DST to replace artificial lighting so the country could save fuel for the war effort during World War I. Shortly thereafter, other countries, including the United States adopted the same program.

The U.S attempted to standardize DST with the Uniform Time Act of 1966; however, states still had the ability to be exempt by passing a local ordinance.

While we recognize that we are a slave to the clock, it doesn’t change the fact that we are complex biological creatures. Research has shown that there is an increase in heart attacks following the change to DST! Sleep deprivation, your circadian clock and even immune function come in to play when considering reasons that a simple one-hour time change can alter your health.

A little exercise will help you adjust to the change more quickly. Sunshine and a healthy eating pattern won’t hurt either.

However, the truth is, most people don’t have physiological issues with the time change. It’s in our head. To counter the change, you must change your mind set. Think of it as additional quality time.

Daylight Saving Time is a promise of more time to enjoy life. No more coming home in the dark, It’s the chance to get outside and move around after dinner. Turn off the TV and embrace the extra daylight. Life is too short.